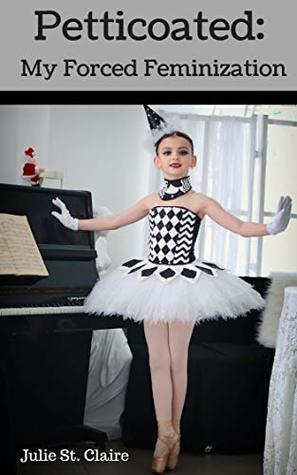 After a family dinner that next evening, Travis and I were hanging out in our basement room talking about girls when Tammy and Charlotte walked in with a small pink leather bag.

We both bolted up and ran past them, sprinting for the back door! We made it past the door and the girls chased us towards the woods.

All four of us kids were back in the basement hanging out before we went to bed. We watched the movie Grease together in the girls room before Travis and I went to our bedroom to go to sleep.

We turned the lights off and I had this sinking feeling that the girls were going to prank us that night.

I tried my best to stay awake but ended up falling asleep. I was alone. I awoke to the sunlight lighting the room from a small window near the ceiling.

I tried to scratch my shoulder but realized my wrists were tied to the bedposts with what looked to be black leggings.

The material was soft against my skin. As I opened my eyes, my eyelids felt heavy and I could see my eyelashes!

They looked longer and thicker than usual, as I had never noticed them before. I looked down and what I saw immediately surprised me. The girls got me good.

I was so embarrassed. The first thing I noticed when I looked down was long blond hair on my shoulders and pink lumps on my chest. How did they put me in a wig without me waking up?

I could feel a pair of satin panties between my legs. I noticed that my legs were also restrained by leggings and when I went to look at my ankles, I realized they also put a pair of pink high heels on my feet and painted my toenails white.

The shoes somehow fit perfectly. I was struggling to get out of my restraints when I heard footsteps coming down the basement stairs.

Who could it be? She turned the corner and was looking right at me. She somehow had her full makeup done early in the morning, wearing a light pink slip, fuzzy pink wedge slippers, and her hair in curlers.

Hold tight while I grab some things upstairs. She uncaps the eyeliner pencil, grabs my face by my chin, and proceeds to make a dot on the side of my face.

Aunt B put the camera down and picked up the mirror. Was that me? The girl in the mirror was so feminine. I actually looked like a real girl!

Archived from the original on Retrieved Introducing the New Sexuality Studies 3 ed. Do You Still Love Me? Huffington Post.

2 Thoughts on “My forced feminization”